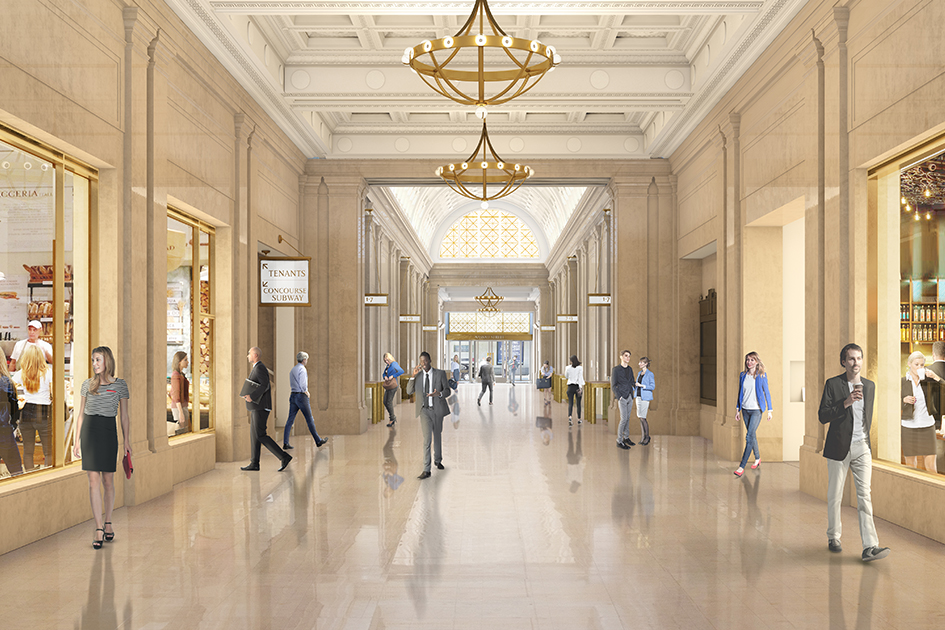 For the past century, Manhattan office lobbies have served as little more than sterile passageways between the sidewalk and the desks above, with building attendants shooing people along to discourage loitering.

Now some landlords are embracing it.

A proposal by Silverstein Properties Inc. to restore and upgrade its 102-year-old Equitable Building in the Financial District includes opening up the lobby space of the full-block beaux-arts skyscraper to the public. Guests will be able to walk through an enclosed streetscape from block to block, taking in the architecture and new dining venues in the skyscraper at 120 Broadway.

“There’s a different mind-set of what lobbies can be,” said Carlos J. Cardoso, a partner at Beyer Blinder Belle Architects & Planners LLP, which is designing the restoration and improvement project. “The question is, how do you engage the public and how do you bring the outside in?”

While Manhattan landlords are only beginning to explore new functions for entrances and lobby spaces, with some adding a cafe or tenant-only lounge space, owners in other cities such as Minneapolis, Milwaukee and Oklahoma City have gone further, turning private ground-floor spaces into public gathering spots.

Some of these ground-floor and lobby designs include couches and cushioned chairs with throw pillows, fireplaces, cafes and cafe seating. They have become work destinations not only for employees in the building but those in surrounding buildings.

“There is the old-world view that these things should be exclusive only to tenants,” said Tony Layne, principal at architecture and design firm Perkins+Will. “But exclusivity is trumped by vibrancy and access and hipness that comes with this.”

Competition in the office market has spurred owners to differentiate buildings with amenities and new approaches to creating social spaces, architects and real-estate executives said.

At the same time, companies are placing an emphasis on the workplace experience to attract and keep employees, offering internal settings such as living-room areas as well as outdoor gathering spaces.

A few years ago, Perkins+Will redesigned the first- and second-floor lobbies and underused retail space in the 1.5 million-square-foot Capella Tower in Minneapolis. Now the space offers a variety of meeting nooks with big couches, reading chairs, bar stools and long tables. The space draws tenant employees and workers in nearby buildings, Mr. Layne said.

“They want the public to be in the building because it just gives it an energy,” Mr. Chilton said. He pointed to New York’s Grand Central Terminal. “One of the most magnificent things about Grand Central other than the magnificence of the space are the people walking through it.”

In Manhattan, inviting the public in doesn’t work for all buildings, and some owners and tenants prefer exclusive access to amenity spaces. But the traditional function of the lobby has been shifting, with various owners adding cafes to lobbies and more casual seating for tenants as part of a growing list of features to stand out.

At 575 Lexington Ave., the ownership group has added soft leather benches, large digital screens with rotating photos and wood panels accenting the walls and ceiling to make the space inviting, said David Falk, president of Newmark Knight Frank, the building’s leasing agent. The owner group is exploring other ways to liven up the lobby space with merchandise and technology, he said.

The $50 million renovation of Silverstein’s Equitable Building relies on restoring elements of the original design and creating transparency and connection between the interior space and the streetlife, the company said. The conversion of office buildings to residential buildings has changed downtown Manhattan into a much more vibrant neighborhood over the last few decades, and the building’s revamp is in part a reflection of this shift, said Larry Silverstein, chairman of Silverstein Properties.

The dark green marble in the 34-foot arch above the Broadway entrance will be replaced by ornamental bronze filigree on top of glass, an original design feature that will allow natural light to flood the lobby, said Mr. Silverstein.

The storefronts will have expanded glass and, where possible, more visible entrances within the lobby. The company aims to lease a large former bank space to a restaurant with lounge-type settings. The security will be positioned close to the elevator banks, so pedestrians can walk through the corridor from Broadway to Nassau Street beneath soaring ceilings.

“The changes that are taking place here are so total that what we want to do is keep up with it and move our buildings along, so that they have the same relevancy tomorrow that they had many years ago,” Mr. Silverstein said.

Write to Keiko Morris at Keiko.Morris@wsj.com