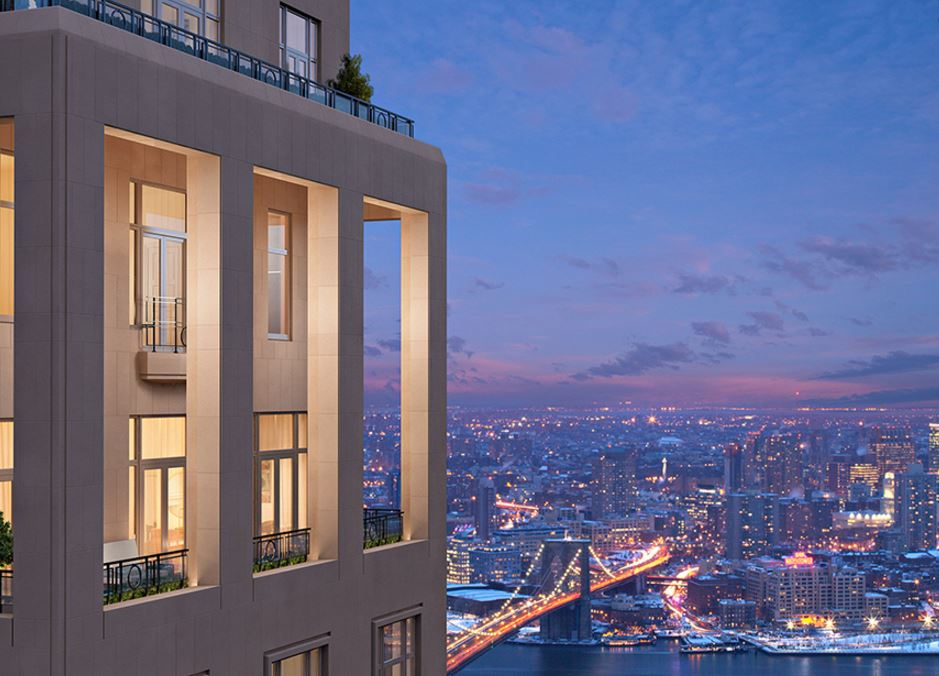 By Billy Gray | The Hollywood Reporter

Lower Manhattan has been on the rise for years, with the population more than doubling since 9/11 and the area formerly known as the Financial District increasingly staying alive after the markets' closing bell. The area's business profile also has seen a dramatic shift toward media tenants with the relocations from Midtown of Conde Nast, Time Inc. and HarperCollins.

The question now is whether that influx will alter the residential makeup as megawatt far-downtown developments battle to match the height and luxe of Billionaire's Row (the ever-taller towers spiking up along and around 57th Street). Witness Silverstein Properties' 82-story 30 Park Place: Downtown's tallest residential building at 937 feet, where a $32.5 million penthouse hit the market in March, it will house a Four Seasons hotel and a Cut by Wolfgang Puck, the first New York restaurant from the L.A. power chef. And the condo conversion of the fabled Woolworth Building (233 Broadway), where the penthouse is expected to list at a cool $110 million. Not to mention 70 Pine St., where an eatery from Spotted Pigs' April Bloomfield and Ken Friedman should draw a sparkly crowd.

Yet there's chatter these days about a slowdown at the tip-top of the luxury condo market (as evidenced by serial price cuts for Robert De Niro's old 11,000-square-foot condo at 165 Perry St. — from $39.8 million last April to $25.5 million as of January). Even the Lower Manhattan office outlook has fogged up after years of next-big-thing billing. Rupert Murdoch called Larry Silverstein in January to renege on News Corp's lease at the developer's 2 World Trade Center. That building still lacks an anchor tenant (a law firm may land there) that Mary Ann Tighe of real estate group CBRE says will need to fill from 500,000 to 750,000 square feet.

Still, residential conversions and new developments are proceeding apace. And entertainment personalities already have a bulkhead in the area, says Douglas Elliman's Jared Seligman. However, "the vast majority of them aren't interested in new development or ground-up construction," he notes. "They want rare properties in more discreet buildings." Fitting that bill is the star magnet 533 Canal St. in ascendant Hudson Square (home to Donald Trump's Trump Soho), where Kirsten Dunst (whom Seligman represented), Michael Stipe and Casey Affleck reside or recently have listed apartments.

The new heat around Hudson Square is thanks in part to Renzo Piano, the starchitect behind the new Whitney Museum a few blocks north, who also has designed a 25-story, 115-unit condo building under construction at 565 Broome St., where sales should launch this summer. Then there's 70 Charlton St., by developer Extell, also a key player in the Billionaire's Row arms race. Construction should wrap in the fall, but sales have been going strong for six months, with one-bedrooms priced at $995,000 and four-bedroom penthouses ranging from $5 million to just shy of $12 million. Extell head of marketing Elaine Diratz won't name any buyers but says "models, restaurateurs and showbiz personalities," particularly those who split time between coasts and want a downtown deal, have shown interest in the building. The median sales price in Hudson Square was $1.96 million in 2015; in FiDi it was $1.84 million in the last quarter of 2015. Both areas offer a bargain compared with $5.5 million in Tribeca.

One downtown figure who's not shying away from real estate publicity is Lenny Kravitz. The musician's firm, Kravitz Design, is announcing exclusively with THR its first luxury New York City assignment, at DHA Capital's 75 Kenmare St. in buzzing Nolita, where 35 apartments will hit the market priced between $1.7 million and $12 million. 75 Kenmare is listed with Douglas Elliman broker Fredrik Eklund of Million Dollar Listing. "Lenny is the area. He's a creative, quality person," says Eklund, citing Nolita's link to such artists as Basquiat and Warhol. "Basically everything east of SoHo has this cool factor. Tourists may not be there. You can be a big celebrity and not be chased around by paparazzi."

Who's Buying High on 57th Street

Saudi real estate and retail magnate Fawaz al Hokair was revealed last year as the buyer of the $95 million penthouse at 432 Park Ave. Up 1,396 feet in the air, that 8,225-square-foot aerie will be the city’s highest residential perch — for now. Al Hokair bumped hedge funder Bill Ackman’s $91.5 million acquisition, with a group of investors, for a penthouse at Extell’s One57 (157 W. 57th St.) from second to third on the NYC real estate price tag record board. And two fashion industry titans — Lawrence S. Stroll and Silas K.F. Chou, partners at Michael Kors — will reside in units above the 80th floor that they picked up for about $50 million. Names will start trickling out soon as 225 W. 57th St., which will dwarf even 432 Park, opens to buyers. Sales at the stouter 111 W. 57th St. should launch next year.