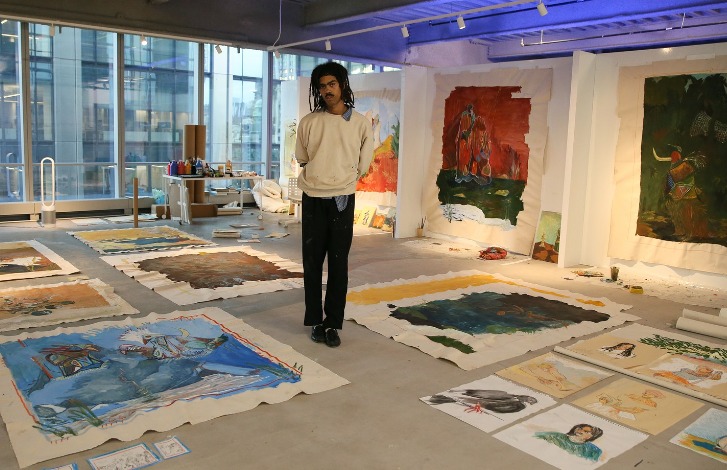 ‘You’re on top of the world’: Inside 4 artists’ studios on the 28th floor of the World Trade Center

As recently as 2015, there were more artists living in New York City than ever before (about 55,000). But from January 2021 to January 2022, rents surged 33%, pushing artists farther and farther out of the city’s creative neighborhoods.

Then came Silver Art Project. Founded in 2018, the nonprofit runs an art residency on the 28th floor of 4 World Trade Center. Like other organizations with similar goals, Silver Art’s mission is to support artists who are being priced out of the city. Silver Art provides free studios and mentorship to a select cohort of artists; to date, more than 50—ranging from painters and visual artists to photographers and sculptors—have participated.

This month marks the end of the second residency, which included 25 artists. While Silver Art is in the process of reviewing more than 1,200 applications for its upcoming cohort, I spoke with four artists who just spent a year working at 4 WTC. Most of them had been working at home before they joined Silver Art, but the residency has opened up new opportunities: Chella Man is gearing up for an art show at a gallery in Tribeca; Helina Metaferia is opening a solo exhibition at the Museum of Art at Rhode Island School of Design and staying on at Silver Art as a mentor.

Here are their stories.

“WHERE ELSE CAN YOU FIND A GREAT COMMUNITY?” —HELINA METAFERIA

When I came out of grad school in 2015, I was living in Boston. I found work teaching visual arts at Brown University, but residencies were a way to support my practice. My first one was at the Skowhegan School of Painting & Sculpture, then I literally went from suitcase to suitcase around the country.

I moved to New York in 2019 and even though I keep saying I’m done with [residencies], I get pulled back in because where else can you find a great community and network of likeminded people who all came to commit to their art practice? The studio space I have [at 4 WTC] isn’t the biggest, maybe 600 square feet, but closer to where I live in Harlem, this 600 square feet would be $2,000 a month. Imagine paying for that. It’s a shell, so you can’t live there, but you need a professional space to present to curators.

I’m in the Sharjah Biennial [in the United Arab Emirates] in 2023. And part of the reason I was invited to do that is the curator reached out to me and said, “I’ll be in New York, I’d love to do a studio visit.” This is a great space and I showed I was professional and ready. Opportunities like this are why I’m here, but being in New York isn’t enough. Being in New York and being supported is another thing.

“THE GALLERIES ARE RIGHT NEXT DOOR” —SUSAN CHEN

I was doing my MFA at Columbia, then the pandemic hit and I found myself painting in my living room. After that, I was painting in a garage at my boyfriend’s parents’ house in Connecticut. I really needed a studio, but also I was in Connecticut, and nobody would come out and do a studio visit. Here in New York City, people will come and see you because the galleries [in Tribeca and Chelsea] are right next door. It kind of messes with your ego a little because you’re at the World Trade Center, and it does sometimes feel like you’re like on the top of the world.

This is a Class A office building, so it’s really nice. There are so many empty office and retail spaces in New York City right now, but most landlords do not want to give up their spaces to artists for subsidized or free rent. Maybe the issue is that, like hotels, it costs more to run a residency than to keep a floor closed? Or a fear that artists won’t take care of the space?

Perhaps if landlords were spoon-fed or given a business model of how something like this would work for them, New York City could see its spaces thriving again. Artists put a lot of love and intention into their work, and that energy gets amplified. I think that’s why where artists go, gentrification inevitably happens.

“I WAS PRACTICING TAKING UP SPACE” —CHELLA MAN

Moving to Silver Art allowed me to create larger works and also continuously connect with this ecosystem of artists that we had on the 28th floor. The studio is absolutely beautiful, with floor-to-ceiling windows, and it’s a very safe area so you definitely feel like all of your art and all of your assets are safe being left at the studio.

I produced a lot of art at the residency. I was able to create the largest painting I’ve ever done. It’s a tryptic titled I Live and Die Every Day and it’s 72 x 108 inches. This tryptic analyzes how modern social and political constructs impact and limit the space available to me as a deaf trans Chinese and Jewish artist. I felt like by going larger than I’ve ever been able to go, I was practicing taking up space, which is something that a lot of marginalized individuals, unfortunately, have to intentionally and consciously put into practice because we’re taught not to.

Before the residency, I [worked at home] in Bushwick in Brooklyn, where I’d been living for 10 years. Silver Art Project was the first time I had my own studio, so it was such an amazing experience to have such a big space to myself. Sometimes the residency brings their own people from institutions, galleries, and museums.

The director of MoMA came to visit each of us in the studio. He was surprised when he saw my work. It made me feel good that someone who had been exposed to so much art gave me positive feedback. In Bushwick, it’s different. I’ve had visits from curators, collectors, but not as much from people from institutions, and I think the residency has been very positive in that way.

I’m going to have a show at Now Gallery [in London], then I’m working on an NFT series with [NFT marketplace] Nifty next month. Now Gallery was going to happen before the pandemic, so it’s not connected to the residency, but the producer of my NFTs was someone who was working at Gagosian Gallery when he visited the studio. Now he works at Nifty, and he contacted me and said, “I remember visiting your studio in Silver Art; would you like to drop some NFTs with us?”