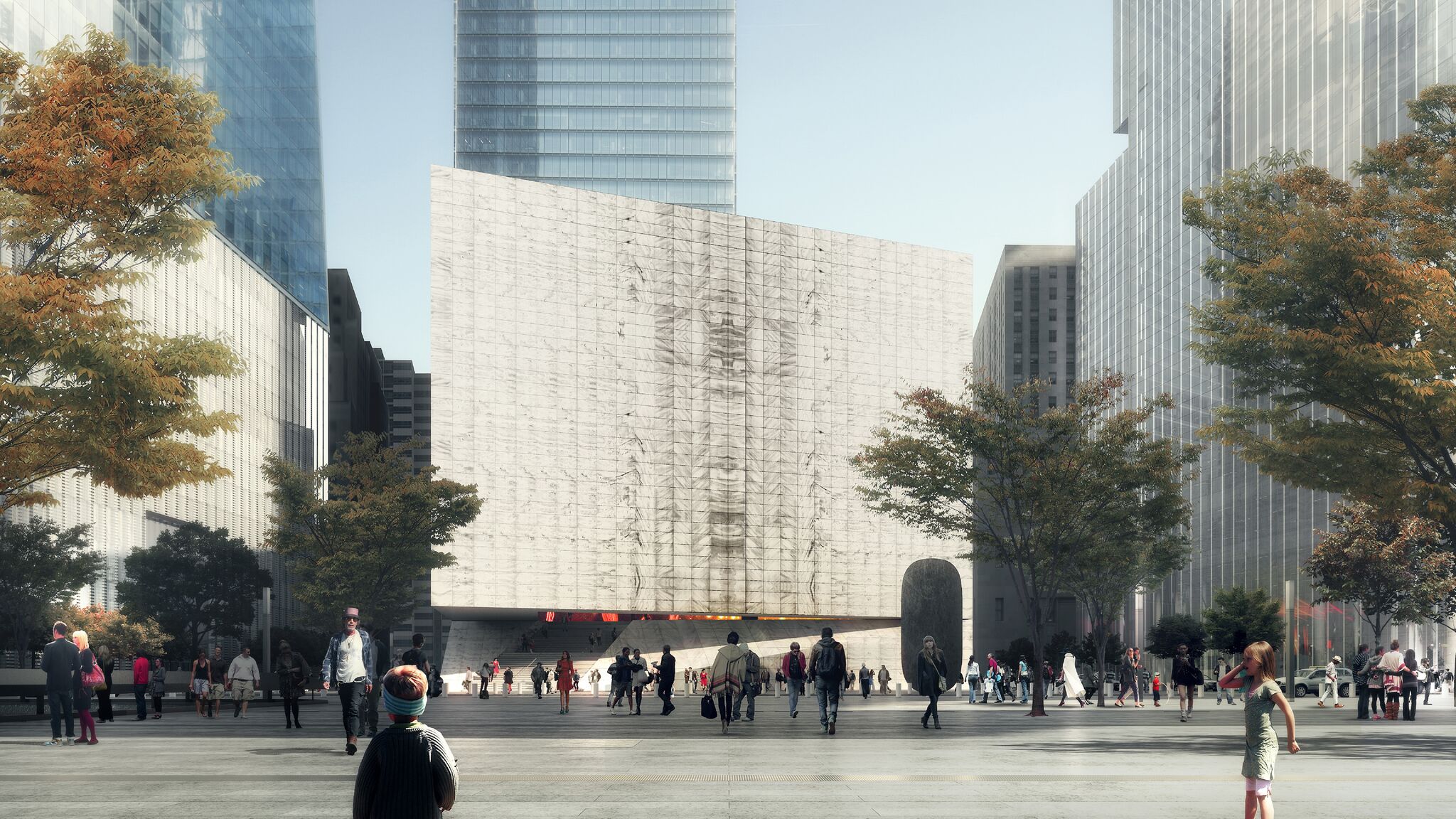 FOR IMMEDIATE RELEASE - SEPTEMBER 8, 2016 (NEW YORK, NY) – The board of directors of the Ronald O. Perelman Performing Arts Center (The Perelman Center) and President & Director Maggie Boepple today unveiled the design for the new performing arts center, located at the World Trade Center site.  Set to open in 2020, The Perelman Center will produce and premiere theater, dance, music, film, opera, and multidisciplinary works while offering a range of amenities for visitors and residents in the Lower Manhattan community.

In addition to its design plans, The Perelman Center’s board of directors also announced the organization’s newly elected Chairperson today—Brooklyn native, Barbra Streisand. Ms. Streisand will take her place at the helm of The Perelman Center’s board effective immediately, joining a number of respected leaders in business, culture, and government from New York City and beyond.

Designed by New York-based REX, the concept forThe Perelman Center is inspired by the Center’s mission to defy experiential expectations. Its design cues were taken from The Perelman Center’s aim to foster artistic risk, incubate original productions, provide unparalleled flexibility, and deliver the most technologically advanced and digitally connected spaces for creative performance.

“Today the World Trade Center site stands as a monument to our nation’s ability to prevail in its darkest hour,” Governor Cuomo said. “The Perelman Performing Arts Center will highlight the values that make New York exceptional – the celebration of diverse cultures from every corner of the globe. This Center will help complete the renewal of Lower Manhattan and, on behalf of all New Yorkers, I welcome this institution and thank those who are working to make this vision a reality.

“REX’s bold, elegant exterior, and ingenious interior demonstrate a deep understanding of the very specific needs of this performing arts house,” said Maggie Boepple.  “Coupled with theater consultants Charcoalblue, REX has, from the inside out, designed and created brilliant solutions for this exciting project.”

Joshua Prince-Ramus, Principal of REX, said, “The Perelman Center is an immensely flexible canvas on which directors can script the patrons’ entire experience from their very entrance into the building. It is a ‘mystery box,’ a constant source of surprise for theatergoers and the community. We are honored to be involved with such an important project on such an important site.”

Considered the final piece of the World Trade Center master plan, the performing arts center has—for over a decade—been part of the vision for the renewed World Trade Center site, and today’s announcement is the result of the continued efforts of key officials on the local, state, and federal levels.  It is one of several milestones in recent months—including a $75M gift from board member and benefactor, Ronald O. Perelman—that signify strong forward movement for the long-awaited project.

Larry Silverstein, Chairman of Silverstein Properties and Interim Board Chair said, “The World Trade Center master plan successfully balanced the site’s commemorative function with the need to recreate a vibrant neighborhood reflecting the energy and humanity of New York City.  The Performing Arts Center is an integral part of that plan."

Design Description
Amidst gleaming glass towers on the north side of the 9/11 Memorial, The Perelman Center is a pure form, rotated to accommodate complex below-grade constraints, address the 9/11 Museum and transportation hub, and engage the site’s main pedestrian streets of Greenwich and Fulton. The building is wrapped in translucent, veined marble—from the same Vermont quarry as the U.S. Supreme Court building and the Thomas Jefferson Memorial—laminated within insulated glass. By day, the volume is an elegant, book-matched stone edifice, whose simplicity and traditional material acknowledge the solemnity of its context. Daylight illuminates the interior through the marble façade. By night, this monolith dematerializes: silhouettes of human movement and theatrical configurations animate the glowing enclosure, an invitingly subtle revelation of the creative energy inside.

The approximately 90,000 square-foot building boasts a pioneering, highly adaptable performance palette that combines both multi-form and multi-processional flexibility. It holds three auditoria (499, 250, and 99person) and a rehearsal room that can double as a fourth venue. The auditoria can combine to form seven additional unique performance spaces for a total of eleven arrangements—including the rehearsal room venue—which can all adopt manifold stage-audience configurations. While the building’s elegant exterior befits the site, its muscular, utilitarian interior expresses the workhorse quality necessary for the changing nature of The Perelman Center’s artistic needs, through ruggedly beautiful materials that encourage the frequent transformation of scenery and stage-audience configurations. The last cost estimate for The Perelman Center for this 90,000 square-foot building came in at $243M.

"The performing arts connect us all and are such a vital part of New York City," said Ms. Streisand. "The Perelman Center will vibrate with theater, music, dance, and film and bring life to this hallowed ground."

“This will be the premier venue for established and new artists alike across the performing arts world,” said Ronald O. Perelman. “From the technology being pioneered here to the incredible design that joins practicality and aesthetics like never before, I’m thrilled to join in today’s unveiling and to welcome one of New York’s own, Ms. Barbra Streisand, to the team.”

The Ronald O. Perelman Performing Arts Center is a global hub for the creation and exchange of art, ideas, and culture that, upon opening in 2020, will present outstanding theater, dance, music, and film from the United States and around the world in a new, state-of-the-art venue.  Conceived as part of Daniel Libeskind’s master plan for the rebuilt 16-acre World Trade Center site, The Perelman Center will produce and premiere works by emerging and renowned artists in the U.S., and stage collaborations with artists, companies, and institutions from around the globe.  The Perelman Center will also be home to the Tribeca Film Festival during its annual run in New York City.  Through its innovative technology features, The Perelman Center will be the most connected theater in New York, and will serve as an important cultural center for the renewed Lower Manhattan community and beyond to enjoy, day and night.  For additional information, please visit: ThePerelman.org

REX is an internationally acclaimed architecture firm in New York City led by Joshua Prince-Ramus. REX and Joshua are renowned for the Dee and Charles Wyly Theatre in Dallas, the Vakko Fashion Center and Power Media Center in Istanbul, and the Seattle Central Library. Current projects include the 110,000 square-foot Mercedes-Benz Future Lab in Stuttgart, Germany; a multi-form performing arts house with up to 200 seats for a private school in Virginia that will also serve its surrounding county; a 41,000 square-foot private residence on Long Island; the re-cladding and interior renovation of the 1,000,000 square-foot Five Manhattan West; and a new, 450,000 square-foot office building in Washington, DC that will host CBS’s Washington Bureau, among other tenants. The work of REX and Joshua has been recognized with the profession’s top accolades, including the 2015 Marcus Prize, bestowed upon architects “on a trajectory to greatness,” two American Institute of Architects National Honor Awards, a U.S. Institute for Theatre Technology National Honor Award, an American Library Association National Building Award, and two American Council of Engineering Companies’ National Gold Awards. For additional information, please visit: www.rex-ny.com

ALL PRESS MATERIALS AND IMAGES ARE AVAILABLE FOR DOWNLOAD AT WWW.THEPERELMANCENTER.ORG