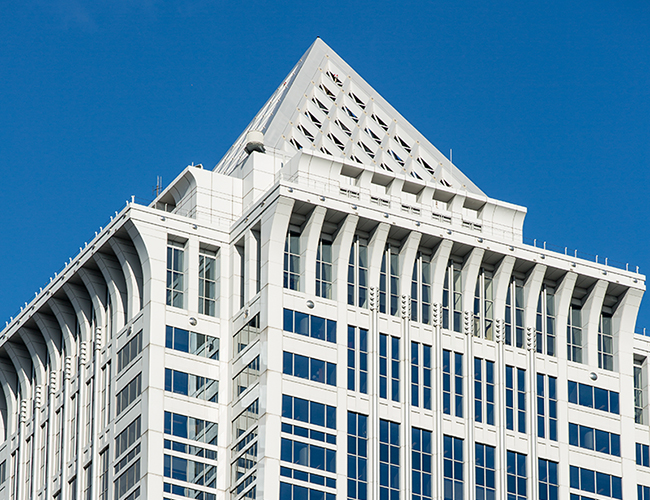 A year after purchasing 1735 Market St. in Center City, Silverstein Properties has landed international law firm Akin Gump Strauss as a tenant and expanded one of its long-term tenants in the office building to push the occupancy well north of 90%.

Now at Two Commerce Square, Akin Gump signed a 16-year lease on 30,000 square feet at 1735 Market. Robert Half International renewed and grew to a total of 17,401 square feet from 14,577 square feet on the 25th floor of the building. The human resources consulting firm has been a tenant in 1735 Market since 2001.

“That was our first major lease since acquiring the building,” said Jeremy Moss, executive vice president at Silverstein about Aikin Gump. “We were very excited about that. We were delighted it was a tenant of this size and a tenant of this stature.”

The lease also underscored Silverstein’s thesis of the Philadelphia market and why the New York real estate company decided to enter it with the acquisition of 1735 Market. Silverstein had looked at another office building in Center City but a deal never materialized. It used that experience as a way to learn about the market and it eventually led to the $451 million purchase of the 51-story, 1.3-million-square-foot office tower that it bought in partnership with Arden Group and Migdal Insurance.

“We think Philadelphia is entering a really strong phase for a lot of different reasons,” Moss said.

Silverstein was drawn to Philadelphia's strategic location on the East Coast and that companies have access to New York and Washington D.C. The company also likes the city's abundance of academic institutions, millennials and quality of life, Moss said.

In addition to Comcast Corp., the city is home to “some of the best law firms in the country if not the world,” he said. “It has all of that.”

Silverstein — which rebuilt much of the World Trade Center complex in New York — joins other out-of-town real estate firms that have bought Center City office buildings in recent years. Nightingale Properties, Shorenstein Properties and American Real Estate Partners are among those that have invested in Center City, launched multimillion-dollar interior and exterior renovations to the office buildings they bought and added amenities while pushing up rent. Silverstein is no different.

“We are working on filling the spaces with new tenants that will not just pay rent but be an amenity to the occupancy of the building and neighborhood,” Moss said. “We are very focused on food and thinking about how we can make the ground floor more permeable.”

The company wants to activate the outdoor space between 1735 Market and 1701 Market as well as have the retail space “bleed” into the lobby. Plans also include making the lobby look and feel more contemporary.

Silverstein is also going to evaluate the fifth floor, which was converted by 1735 Market’s prior owner, Equity Commonwealth, into an amenity space with conference rooms, lounge areas and an outdoor terrace.

“We want to see if we can further enhance it to make some physical changes to make sure it has the right balance of uses,” Moss said.

Silverstein has a division that focuses on programming at its buildings such as organizing wine tastings, lectures, lunch-and-learn events and yoga. It created an app that tracks a schedule of these activities. It also arranges discounts at local eateries and other services in the neighborhood and that is part of the app as well.

“Those touches and elements, it is much more of a concierge approach,” said Tom Weitzel, a broker with JLL who represents Silverstein in leasing the building.

While the occupancy has nudged up, so have rents, which are the high $40s a square foot.

Bullish on Philadelphia and its future, Silverstein continues to look for its next buy in the city. “If the right opportunity presents itself, we would seriously look at it,” Moss said. “We’re feeling very good about the investment we have made there.”